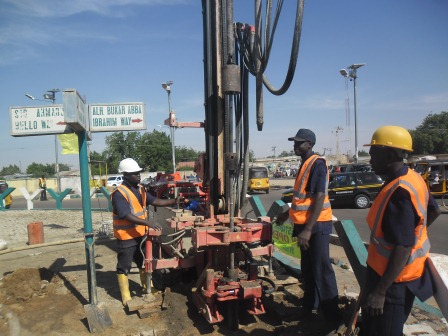 Posted by chiefeng In Blog

The test will be stopped when the sum of the number of blows for increments N-value, it will be N = 50 blows; where the test will achieve N-value < 50 the boring test shall be continued until an appropriate bearing stratum where more than an N-value > 50 is obtained.

Sampling are facilitated by the use of split barrel sampler from which collected samples are recovered by the suction of the non-return air valve in the sampling head. The sample are retained as a small disturbed sample. Where a sample is not retained in the split barrel sampler or when the cutting shoe is replaced by a solid cone, a disturbed sample shall be taken from the test zone. The samples will be removed from the split-barrel and wrap it or seal in a plastic bag to retain moisture. Mark the sample and label it with an identification number, withdrawal depth and withdrawal station. Result of the field standard penetration test are presented in standard format to reflect depth at which test is conducted, number of blows to effect specified penetration and material encountered at each layer.